Why would anyone Homeschool?

FYI: This is my last preachy/opinionated post of the summer :)

Homeschooling your kids is hard. A mom needs to be "converted" to the idea for it to last.  But the good news is, statistically speaking, homeschool in general is undeniably a great choice.  I found the study to prove it. 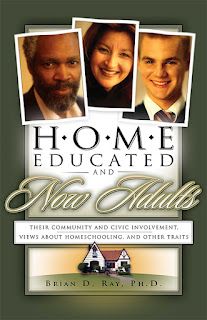 Brian D. Ray, Ph.D. shared his study of adults who were home schooled in his book "Home Educated and Now Adults."

He interviewed 5,254 people who were home schooled for 7 or more years, ranging in age from 16-69 with 74% of them being age 18-24.
He got his data for the general U.S. population statistics from the National Opinion Research Center General Social Survey, filtering it by ages 16-29.

These were the results (click on table to enlarge): 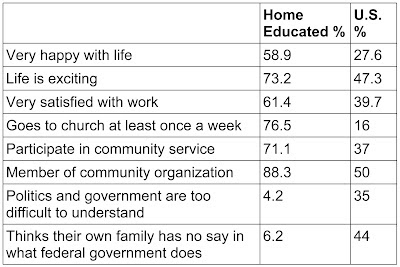 More statistics for adults who were homeschooled:

The odds seem to be in favour of homeschooled children!

However, I have one complaint about the study.  I think it's unfair to compare home educated children with the general public.  Home educated children, more often then not, come from two parent families where one parent is a stay-at-home parent.  These parents obviously care about their kids enough to try an unconventional education by sacrificing time and giving effort.  They come from larger families (around 4 children,) and the vast majority of these homes are religious.

That is not the case with the general public.  I have no idea how you would do a fair study, so I will appreciate this one as is.

Homeschooling is becoming more and more prevalent, in the past decade the number of homeschoolers has doubled from one million to two million in the U.S.  I look forward to this type of study being done again now that there is more diversity out there.

In the mean time, study or no study, I feel homeschooling is right for our family, and it's nice to see that others are succeeding at homeschooling as well.
Posted by Lindy's Homeschool at 3:42 PM

My Other Schoolish Blogs

The Purpose of This Site

This site is meant for me. It is meant to help me keep a record of what my kids are learning and what I have taught. It's also to help me be accountable and not slack off. I know this is what I want to do, and I need to record our successes.
Also it might help other moms of Dyslexic children.
Dyslexia is a super power!
(just chant that through the REALLY tough parts of teaching LOL.)

The "awkward and unprepared" Myth

There are many misconceptions and biases against homeschooling, and many people really think that I've never heard them or considered them. Many people worry about the "inevitable social awkwardness" of homeschoolers or that they are "unprepared for the world." In my experience, I've found that homeschoolers tend to be as socially "normal" or "awkward" as their parents. As far as "unprepared for the world" is concerned, that depends on how they are taught, but I have seen many successes first hand. Basically, I know the ins and outs of the decision I've made, thanks.

When I was first married, I fell in love with the kids of the Leavitts and Schafers (my sisters-in-law families.) They were...and still are...confident, leaders, innocent where they should be innocent, creative, and accepting. They were also homeschooled. I wanted my future kids to be like them, and if homeschooling was part of that equation, then I was willing to make the sacrifice. Now, after years of study, prayer, and experience, I want to homeschool for many reasons. I want my kids to be family oriented not peer oriented. I want to include the gospel in every aspect of what they are taught. I want them to think out side of the box. I don't want them to be obsessed with what is "cool." I want them to feel loved by those around them. I want them to know who they are and what they stand for before they are bombarded by outside influences. I know that many families can do this without homeschooling, but it seems a lot harder to me. Basically, I'm a control freak. I want to be in control of my children's learning and social life....homeschooling makes that easier.
Also, now that I've realized they are severely dyslexic, I think homeschool is the best place for dyslexics to learn.
And there's the statistics.

For math, I do RightStart Mathematics, which is an abacus based math, Times Tales to memorize multiplication, Video Text for Algebra, and Mathantics or other supplements on youtube.
For Devotionals, I use Come Follow Me.
For Reading, I have used the Barton Reading and Spelling program, but right now I'm experimenting with All About Reading and Logic of English.

For Writing, I use Handwriting Without Tears, IEW Fix It! Grammar, and IEW Student Intensive Writing.
For History, and Science, I use The Four Year Plan (which I LOVE.) This year we are using the "Family Jubilee" book which covers Biology, Modern World History, and New Testament.

Links to things that have helped me